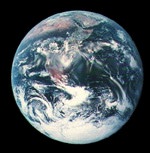 - A Do-It-Ourselves Approach to
Gaian Consciousness and Global Compassion

"The science of our time has made the Earth this special unity before the immemorial unity of mankind's heart and mind has been fully recognized...It is not "the truth" that we now need but a technique for realizing it..." Lewis Thompson, 1949

From April 2001, each month, during the fullness of the moon, at the moment of sunrise over eastern Africa and our species' earliest known community, a new hour is born, an Hour for the Earth: The Earth Hour Conspiracy is a Japan-inspired plan, practice and self-fulfilling prophecy to awaken humanity to the "truth" of the living Earth. Using both the newest and oldest psychic technologies, it offers our entire species an imaginative way to re-experience its essential connectedness, interdependence and ancient coevolution.

Spurs to Saltation
Problematic Japan and The Compassion Deficit

Japan today has perhaps diminished authority to lecture the world on specific issues like ecology, democratization or human rights. But one factor exacerbating problems in all of these areas is the shortfall in planetary empathy and compassion. The less we feel that distant peoples or exotic ecosystems are a part of our lives, the less likely are we to care, let alone fight, for their protection. The Japanese are no more globally sensitive than the next people, but within their islands and organizations they have long recognized the extraordinary powers of empathic attunement, group consciousness and collectively secured identity.

Exercised on a limited scale, selective empathy can of course spawn in-groups, rivalry and a lot of ugly emotions. The trick is to employ our empathic techniques to bond us with Gaia and the all-inclusive in-group of the race. To quote Kyoto sociologist Kim Yong Duk, "Humanity's next real saltation will only begin when we stop seeking our identities in companies, churches or nation-states, and learn to draw our strength directly from the planet as a whole."

(Saltations denote leaps or bounds in dance, but now metaphorically refer to abrupt jumps in evolutionary progress. For example, the Self-recognition that first led Neanderthals to ceremonially bury their dead, or more recently, the political necessity to at least simulate belief in racial and sexual equality - both signify saltations, real breakthroughs in human social evolution.)

Reclaiming Conspiracy : The Breath that Binds

Perhaps the most ancient empathic technology is the practice of "conspiracy." The term itself is from the Latin "conspirare", to breathe together. Originally, conspiracy or conspiration was simply the reciprocal harmonization of breath to establish mental/emotional resonance and sympathy in small groups. The technique has been employed in many ancient religious and magical traditions to intensify subliminal communication and create a feeling of "we-ness", solidarity and collective potency.

(In fact, the euphoric sense of confidence this practice evoked often boiled over into historically premature outbreaks of egalitarian fervor and rebellion. These early democratic contagions earned conspiracy a nasty reputation among hierarchs and its enduring negative connotations in our dictionaries. Cf. also, authoritarian lexicography's distaste for "insubordination", by all rights one of democracy's highest virtues.)

When a certain number of persons meet together in a sacred place with common devotion they move to sympathy supranatural powers. These communions can create psychic forces that palpably affect the spiritual and material environment... Avicenna, 1037 A.D.

Technically, the minimum quorum or critical number necessary to empower a conspiracy was thought to be ten or twelve - as in the Judaic minion or the pagan coven. Although there is no known upper limit to the number who can participate, conspiracy requires a mutually perceptible reference rhythm and thus usually only works in intimate circumstances and contiguous groups

While we cannot rely on breath harmony for a global conspiracy, there is another even more profound source of empathic synchronization available - the entrained rhythms of our nervous systems, particularly the wave trains surrounding our brains.

We can control our brain waves to a remarkable degree. Hundreds of biofeedback studies document that most individuals can learn to consciously shift their brain wave frequencies down from the beta range of "normal" consciousness (14-26 cycles per second) to the "meditative" alpha range (8-13cps). (One researcher was able to shift between beta and alpha ranges so deftly that he could use his electroencephalograph (EEG) "to send messages to a computer in Morse code.") [1]

This minor 5 ~ 10 cycle per second shift transits a major psychic threshold. It marks the difference between the gusty, gritty brightness of "everyday" beta wave activity and the sensual warmth and shadows of alpha receptivity. Alpha states are meditative, listening, healing states. They are marked by a relaxation of egocentric stress and a trusting receptivity to the environment as in moments of prayer, musical rapture or sexual languor.

Psychiatrist Arthur Deikman has written extensively on the differences between these states and their implications for social evolution. He considers the human being as a living system with both psychic and somatic dimensions, whose organization is coordinated in two primary modes: an "action" mode and a "receptive" mode.

"The action mode is a state of striving, a state organized to manipulate the environment. The EEG shows beta waves and increased muscle tension. The principal psychological manifestations of this state are focal attention, heightened boundary perception, and the dominance of formal rationality.

"In contrast, the receptive mode is aimed at maximizing our intake of the environment. The EEG tends toward alpha waves and muscle tension is decreased. Other attributes of the receptive mode are diffuse attention, decreased boundary perception, and the dominance of the sensory...

"The two modes are not to be equated with activity and passivity. 'Letting it happen' is an activity, but a different activity than 'making it happen'. In many alpha state conditions, an active relationship with the environment takes place, as in the case of a monk working in the garden or lovers in sexual embrace. Characteristically, the relationship to the environment is what Buber calls the 'I-Thou', in contrast to the 'I-It' of the action mode...

"If each person were able to feel an identity with others and with his environment, to see himself as part of a larger unity, he would have that sense of oneness that supports the selfless actions necessary to regulate growth, stop pollution, end hunger, etc. The receptive mode - the I-Thou relationship - exists and it may now be needed to provide an experiential base for the values and world view needed so desperately by our society as a whole."[2]

Creating that experiential base and sense of identity may not be so difficult. Researchers in both the East and West are reporting increasing evidence for the existence of empathic entrainment and psychic fields that can influence each other at a distance. During beta consciousness, the right and left hemispheres of our brains usually generate differing or asynchronous patterns. Alpha consciousness is accompanied by increased synchronization between our hemispheres (although which causes which is still a matter of debate). Laboratory studies in Japan and China on Qi-gung adepts suggest that right/left synchrony synergizes psychic energy and enhances the ability to feel and influence the environment. The Qi-gung masters were not only internally synchronized, when they gave clinical treatments their patients also showed identical EEG patterns.

Even among neophytes the effect is not difficult to demonstrate. Some years ago at the University of Mexico, for example, pairs of randomly selected strangers were connected to EEG machines and instructed to close their eyes and try to "communicate by being aware of the other's presence and to signal when this has occurred." When subjects were in the alpha state, many reported active images and physical sensations of their partners and "when they reported a feeling of having blended, their EEG patterns had become nearly identical."[3]

If synchronized alpha states accompany intensified empathy, aligning or entraining our brain waves in this range should help magnify mutual awareness and our powers of compassion. But what is to be our reference frequency and how can we communicate it to everyone on Earth?

Vibe with the Mother : The Schumann Solution

In the 1930s physicist Heinrich Schumann discovered a permanent standing wave in the atmosphere, resonating between the Earth's surface and the ionosphere. This wave, a.k.a. the Schumann Resonance, "Gaia's brain wave" or simply the Earth Wave, is fed by lightning discharges and the planet's internal electromagnetic activity. By a rather stunning coincidence, its frequency fluctuates slowly between 9 and 12 cycles per second - right in the heart of the human alpha range.

The Schumann Resonance thus offers us a common global reference, a planetary harmonic, if you will, that is hundreds of times more powerful than the electric fields within our bodies. If, as studies show, we are somehow able to attune ourselves to the much more subtle wave signals within other persons, tuning into this all-pervasive frequency of the Earth should be relatively simple.

Moreover since our brain waves reflect and influence fluctuations in our psychosomatic energies - including our breathing rhythms, entrainment with the Earth Wave may allow us to achieve indirectly a true and classical global Conspiration.

Because of the planetic scale of the effort (and because the relative contributions of Arabs & Ainu, artisans & account executives or Anglicans & animists are impossible to predict), the Conspiracy is timed to a transcultural reference. That is, the Earth Hour will: A number of enthusiasts expect to see personal or local effects quite early in the Conspiracy. (Some occult buffs believe that as the practice spreads, the psychic energy will express itself in classical phenomena like aura magnetica ["magnetic breezes"], Pentecostal tongues of fire, or iridescent phantom thought-forms!)

Most, however, think it will take years to fix the practice in international calendars, let alone to inspire it to life in the planetary mind. I tend, reluctantly, to side with the realists and imagine years of effort before participation is sufficient to cross the first threshold and generate a noticeable field. ("Noticeable" meaning that virtually everyone, even those ignorant or forgetful of the Hour, will psychosomatically be able to feel it begin.)

But however long the time frame or dramatic the side-effects, we must not be distracted from the final objective. In the words of renegade paleontologist Teilhard de Chardin, a cult hero in Japan since the war:

"The outcome of the world, the gates of the future, the entry into the super-human - these are not thrown open to a few of the privileged nor to one chosen people. They will open only to an advance of all together, in a direction which all together can join and find completion in a spiritual renovation of the planet..

"A new domain of psychical expansion awaits us beyond the lines where empires are set against empires, in an interior totalization of our world upon itself, in our unanimous construction of a 'Spirit of the Earth'."